Now I am still new to this beautiful and sometimes crazy country, but one of the things that struck me the most odd upon my arrival (and previous trips here), was driving.

I'm not trying to scare you away from Panama with this article...merely attempt to innoculate you on what to expect.  Driving is quite an experience and has a little big of a learning curve (I'm still learning..) but its well worth it and fun!

If you have never been here before, it is definitely something you need to check out. Its seems Panamanians have a slightly different driving culture than many other countries. But, don't be scared....their system is a little crazy but you can contend with these drivers by being patient and staying on course and in your lane.

Panamanian drivers seem to like to disobey usual traffic rules, traffic lanes, lights...and will fill every possible space allowed on the road in order to nudge their way through traffic. This is something I am still getting used to. And people love their car horns! Car horns are used when passing a merging or turning car as an alert ‘Hey I’m coming through…watch out’, or to signal you that they will let you in traffic ‘Beep-Beep’… Or the ‘Holy S*&T! Get out of my way’ – BEEEEEEEEEEEEEP BEEEEEEEEEEEEEEEEEEEEEEP!!!!

Funny thing is, being cut off is basically normal here. Expect people to cut infront of you, nearly missing your bumper. This is normal, don’t worry. And watch out for those motorbikes. They basically don’t obey any road rules and are always weaving their way between cars down the centre lines, cutting over boulevards, and going fast. So when you are driving, keep an eye on your mirrors always.

Watch out pedestrians too.  Often people walk along the sides of streets and there is a big business of selling stuff in the streets.  You will also see folks walking up and down the middle of the street in traffic selling car fresheners, newspapers, cell phone covers...fruit, veggies...all kinds of things...  I bought a bag of limes for a buck and a bag of tomatoes for buck as well, good deal (just wash them thoroughly when you get home!).  I tend to think of these sellers as walking dollar stores on the street...

Just watch out for these folks when driving, they are trying to make a living too and would rather no get squashed.

Eyes open and watch your mirrors.

Signalling is used even less. Its almost like people just go and drive where they want, no regard to signalling intentions or looking out for other drivers…but we are assuming their signals even work…Hahaha… But I will get to that later in another article.

Coming from Canada, where everyone more or less drives in their own safety bubble, giving lots of room for the cars next to you, and yeilding for traffic who has the right of way. You are not going to find that here.... Especially driving through the cities. People drive nearly touching, side by side or when squeezing past you in the oncoming lane.

Believe it or not, this is considered a lane, you almost trade some paint in these narrow streets...  milimeters from the cars next to us.  And look further up the road...tight squeeze!!!

Even the emergency lanes are not spared the traffic which kinda makes you frustrated as those lanes are for EMS vehicles, not passing lanes.

I am not sure where these driving habits came from or why driving is this way... But I know you used to be able to pay your driver licence examiner and you could get your licence that way... Little bribe here and there...

You will see drivers changing lanes half way through a traffic jam, or making a left turn across several lanes in heavy traffic blocking nearly every lane of traffic.

Look at this joker...decided AFTER the lights changed to make the left turn into a parking lot, however, he couldn't because of the car infront of him still waiting to get into the parking lot...But they felt they had to go regardless....  Weird!  So every which way of traffic was blocked while we waited for this goof to get outta the way.

This also leads into parking. Parking is a problem in any city, however here, people will park almost anywhere! Parking lots are full? No problem parking in the dumper zone is still open… Drive way is full…my truck will fit on the curb. Easy. Or if the curb is full as well, there is always the front yard…Hahaha, I am getting carried away..parking in the front yard only happens in the burbs and country residences..hahahaha…

Check out the great parking job ahead...  This is pretty common for here.

Now I am not trying to paint you a picture that all the drivers are crazy, constantly changing lanes and trying to get passed you and cut you off. Not at all. I’m just trying to give you a feel for what to expect if you are going to be driving around. For every crazy driver (I think Taxis are the craziest…they seem to jump all over the place), there are just as many good drivers. Not everyone bought their way through their driving test. I also noticed that if you signal your intentions, someone will always let you in. One trick to keep in mind, which is what the locals do, is to start nudging your way into traffic…some people may drive around you, but eventually if you nudge further enough, someone will ‘Beep Beep’ at you to let you in or flash their lights to allow you to make that left turn across their lane. Just get your nose in…slowly. And if you see someone trying to nudge their way in, don’t get mad…this is part of the driving culture here. Let them in, and don’t get angry because you might just be helping another tense expat wiggle their way through traffic…

Panama is also in constant construction to improve the transportation infastructure, so there hopefully will be even better things to come.  The city buses are being modernized and the subway is now open as well.  When in doubt, try a crazy taxi...just negotiate your destination and price before getting in.  There are always alternatives to driving yourself...  and pretty cheap too!!!

I have travelled through much of western Europe, and the way the Panama City is setup is more like an older European city…in terms of road/highway structure. I haven’t been here for that long but I still get lost after 2 minutes of entering into the city. So don’t be surprised when you arrive to be terribly disorientated for awhile. I still am!

I am still trying to find a rhyme or reason to the layout, but alas…its not like the grid patterns I am used to. I hate not being able to see the pattern or know the routes… And to make matters worse, the signs displaying the names of streets are few and far between. Even the locals who have lived here all their lives don’t know all the names of the streets. Actually most just navigate by landmarks or familiar routes.

Makes me wonder how the Police and EMS folks get around and communicate locations to each other… ‘We have an car accident by Pricesmart (a popular grocery store chain), close to Via Brasil beside the big tree…’???? Hahahaha, I am sure they have their own way of coordinating, I’m just joshin’ with you.

The layout of the city is like a maze to me. A big confusing maze. I know it will take time to memorize and find my way around. Just look at Google Maps, zoom into the city. Scroll around…you will see what I mean. Side streets galore…twists, turns… reminds me more of some of the old cities I went through in Germany and Holland…If you are new and have no map, you are destined to be lost in minutes.

I think I can find my way to the Albrook Mall now (because I love shopping…), with little guidance… But I still lose all sense of direction after that. I am told to learn the main routes of the city first. The primary arteries will get you almost from one end of the city to the other. The only bad part is those street signs again…Not helpful!

So when ever I am in the city, I use my iPhone and use a particular app called Waze. Eldon has mentioned this before in his writings here, but I want to reiterate how extremely helpful and great this app is. It is very precise and even when I am driving with locals here, I type in the destination, and it guides me along almost the same route they take… I say almost because its not perfect and may take you the long way round to get somewhere…but it does do a great job!!
Try the app at home, if it works here, its bound to work there too. It will also display what other users have reported as well, so it could tell you of rain ahead, traffic jams, accidents, police checkpoints… It’s a wonderful invention!

Here is a Waze example of the traffic reported by Waze users during rush hour, approximately 5:30pm on a Wednesday.  You can see the speed reported on certain streets and where people have reported traffic jams.  Its killer out there...avoid rush hour if you can!

So if you are planning on driving here, be aware of the way people drive here, Panama’s driving culture…and instead of getting lost, use a helpful app like Waze to plot your course. Just don’t let the police see you using your phone while you drive… Same rules here as Canada, cell phones while driving equals ticket. And remember, Panama City runs east to west and visa vera… like the country. Sounds simple enough to remember but when you are on the ground, it’s a little more disorientating.

Unfortunately with the setup of the city and the growing population (as well as driving habits), also contributes to traffic jams.. in Panamanian, they call it ‘Tranque’. The rush hours are the worst of course and traffic can grind to a stand-still. I would advise you, if possible, avoid the morning rush hour and the end of work day rush hour. It can get pretty dicey…and then you are stuck in the heat, car running, AC running, gas burning faster… I have seen people pushing cars off the road because they ran out of gas waiting in traffic. So again, if possible, avoid rush hours! If you do find yourself in rush hour traffic, don’t worry…it will move, just slowly. Just be prepared to give yourself another hour at least get through it and I hope you have enough gas!

Here is an example of traffic during rush hour while leaving the city....the traffic line up goes on for miles!  Avoid rush hour if you can.

Just be patient, plan your route, use navigation guides (or have a good co-pilot), obey the traffic rules and remember the driving culture here…nudge your way in, be courteous, eyes open, and again, be patient. 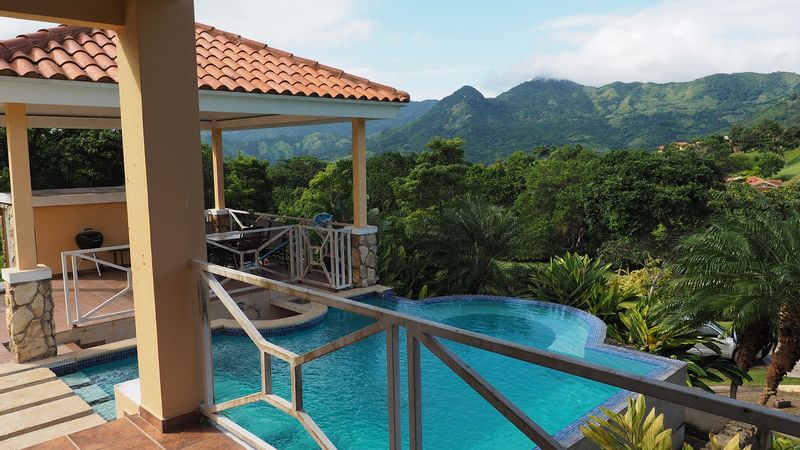